April is National Donate Life Month, and it is also National Humor Month.

Martinlow Spaulding, living with kidney disease for over 25 years, easily celebrates the significance of both. Spaulding is a transplant recipient who combines humor and laughter in his daily life. He tells a lot of jokes—some of them get a few giggles, and some of them get a few groans. But his positive attitude and outlook on life help him find the “funny” in a lot of situations.

Now for a taste of his humor. The license plate on Spaulding’s car is brief and to the point: “IP4Rita.” He believes that humor and laughter are important. He also believes in educating others about kidney donation. His license plate gives him ample opportunity to share his message with anyone that asks about it. 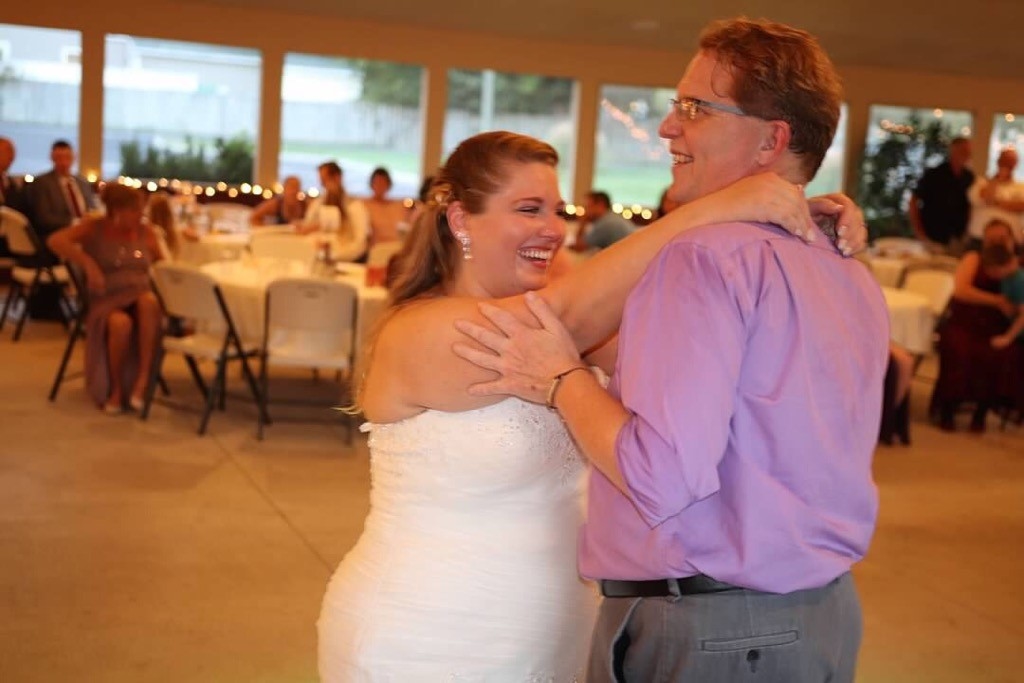 Spaulding, 53, is the Payroll Specialist with the Metropolitan School District of Warren Township in Indianapolis, IN. He received his undergraduate degree in music, theater, and business from Marian University and his master’s degree in Administration from the University of New Orleans. His greatest treasures are his five daughters and one son.  Despite growing up with a dad with chronic kidney disease, his children make him proud, make him laugh, and enrich his life.

It was Labor Day in 1991 when Spaulding was home with his nine-month-old daughter Olivia that he became ill. He had been helping his family bale hay and thought the heat had made him sick. However, a trip to the local hospital’s emergency room, which ruled out a heart attack, showed his kidneys were only functioning at two percent. He started out on home dialysis while he awaited a kidney transplant. His family members offered to be tested for donor compatibility, and his brother Paul was a perfect match.

Spaulding then used many of his skills and talents to start raising funds for his transplant. This was before the popularity of the crowdfunding programs on the internet. His organizational skills, creativity and motivation helped him to successfully raise funds to cover out-of-pocket medical expenses and missed work time by family.

A year after the transplant, his lab work indicated the disease was returning—again attacking his kidneys. Luckily, his kidney function decline was much slower than anticipated. “They thought I’d get a year out of the kidney, but I made it to ten years,” he said. He attributes the longevity of the kidney to his healthy habits of exercise, eating well, consistently taking his medication, regular doctor appointments and having a positive attitude.

Although he has maintained a sense of humor along with his good health, Spaulding is serious when it comes to advocating for fellow kidney patients. Since his last transplant, he continues one-on-one patient education and fundraising for others in need of transplants. He has volunteered with many organizations, including the Renal Support Network and The Renal Network. During his time with The Renal Network he twice received the national Robert Felter Patient Award, which recognized his contributions to serving those with kidney disease. This award held particular meaning for Martinlow as he regarded Bob Felter, who worked tirelessly for kidney patients during his lifetime, as both a mentor and a friend.

He also spent years lobbying in the nation’s capital for the Kidney Care Quality Improvement Act. On a visit to the Washington, D.C. offices of then Member of Congress, Julia Carson, he was asked: “Where is the kidney patient,” and Spaulding spoke up and answered, “Here I am.”

Spaulding is optimistic about his future. He enjoys his life, family, friendships and new experiences. He states “I’m thankful, so blessed to be in excellent health. I exercise three times a week at the YMCA, and I haven’t been hospitalized since 2004, my second gift of life. I think it’s most important to work with your healthcare team, but you also have to be a self-advocate and stay in charge of your health—making sure all your doctors communicate with each other.”

He also likes to hear jokes so that he has a supply of them to share with others who might need a smile. Here’s one that he likes:

Do you have a joke or a funny riddle to share? All of us can benefit from a daily dose of humor and laughter. We welcome yours.