Vascularization of engineered solid organs – like the kidney – is part of the Holy Grail pursuit of regenerative medicine. Being able to create organs with the needed blood vessel structure means the organs are supplied with needed nutrients and oxygen to survive when implanted.

The two Wake Forest teams both used 3D bioprinting technology to create liver tissue constructs that were vascularized and able to mimic the human liver function in the body and survive for 30 days in the lab. Each team used different 3D-printed designs and different materials to produce live tissues that harbored cell types found in human livers and mimicked liver function in the body. The recent NASA news of the awards was exciting to share because what we learned through this research challenge helps to inform our work overall to succeed in the vascularization of solid organs.

As readers know all too well, there are simply not enough donor tissues and organs to meet demand. In the United States, chronic kidney disease is prevalent, affecting more than 700,000 patients living with end stage renal disease. Although dialysis has supported the survival of patients with end stage renal disease, kidney transplantation remains the only definitive treatment. However, there are currently nearly 100,000 people on the waiting list, with nearly 9,000 patients removed yearly due to deteriorating medical condition or death, which reflects the current state of ongoing organ shortage.

The limitations of current therapies for end stage renal disease led WFIRM researchers to explore the development of renal 3D constructs with the goal of improving, restoring, or replacing partial or total renal function. Regenerative medicine, which aims to harness the body’s innate healing abilities, offers the hope of engineering replacement organs in the lab to help solve this shortage. Because these organs are made with a patient’s own cells, there will be no issues with rejection as there are with organs from donors.

While kidney transplantation is currently the most effective therapy for end stage renal disease, scientists around the world are looking for better options due to the shortage of donor organs and the side effects of immunosuppression. As a solid organ, the kidney is very dense with cells, which means that it has high requirements for oxygen. The intricate nature of the renal vasculature makes replication difficult. The challenges in engineering functional replacement kidneys are many, from growing the millions of cells required to engineer the organ to finding a way to supply the organ structure with oxygen until it can integrate with the body.

WFIRM scientists have created kidney scaffolds using biomaterials and cells that experimentally were shown to be functional, in that they were able to filter blood and produce dilute urine. This research is still underway and progressing. The teams are also working on other promising strategies – “recycling” discarded organs, cell therapy, and partial augmentation. 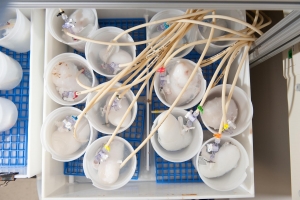 One strategy is to use discarded organs from humans as a platform for organ engineering. The process starts by removing all cells from the organ, leaving the “shell” of the organ to create a scaffold that could hold a patient’s own cells. Crucial microvessels vital to filtering contaminants were left intact after the scrubbing process, while growth factors needed to maintain function were also retained. The patient’s own cells can then be expanded and used to repopulate the scaffolds. About 2,600 donated kidneys are discarded each year after they are found to be unsuitable for a transplant. The team believes that this is a resource that can be salvaged with the right prep work.

By harnessing the unique properties of human amnion-derived stem cells, WFIRM scientists have demonstrated that using therapeutic cells could potentially help recover organ function in a pre-clinical model of kidney disease. Our studies demonstrate that treatment with amniotic fluid stem cells had positive effects on functional improvement and structural recovery of the kidney. WFIRM scientists were first in the world to identify and characterize stem cells derived from amniotic fluid and the placenta in 2007 and have developed techniques for isolation and expansion of the cells. Amnion-derived stem cells can be used as a universal cell source because they have the ability to become different cell types as well as the ability to be anti-inflammatory, making them a potential source for regeneration. Unlike other stem cells, amnion-derived stem cells are not as likely to provoke an immune system response. Additionally, their use does not lead to risks of tumors, as with other stem cells.

WFIRM scientists also developed a system to isolate normal cells from kidneys. The cells can be obtained from end-stage failure kidneys. The cells can be expanded, grown outside the body, and can then be delivered in a gel solution into the same patient. This therapy is currently in clinical trials in order to prevent patients with diagnosed kidney failure from progressing to transplantation.

WFIRM has a team that is studying the effects of a cell-derived molecular therapy to treat kidney fibrosis. In this research, already tested in cats with chronic kidney fibrosis, scientists are using a cell-signaling chemokine – CXCL12 – that is produced by cells and stimulates tissue regeneration. They hope that what they learn will someday help inform treatment for humans. 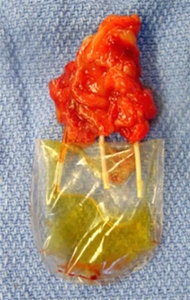 In a proof-of-concept study, WFIRM researchers showed the feasibility of bioengineering vascularized functional renal tissues for kidney regeneration, developing a partial augmentation strategy that may be a more feasible and practical approach than creating whole organs.
The scientists created a novel collagen-based vascular scaffold – a mold – that is structurally identical to native kidney that was able to develop vascularized tissue.

The scientists essentially made molds using donor kidneys as templates, creating hollow scaffolds that were cultured before implantation into the preclinical model. The renal vascular scaffold showed a 3D branching architecture with visible hollow channels that were interconnected and continuous. These branching structures were able to allow perfusion similar to native blood vessels. The researchers showed that the vascular scaffolds integrated with the host vessels and supported renal cell viability. The results are promising and support continued exploration of this method to further evaluate the improvement of renal function. Overall, we are pleased with the outcomes thus far, but further work is necessary to establish a reliable and reproducible system for clinical translation.

In summary, while there are many challenges to meet for complex structures like the kidney, regenerative medicine therapies are starting to reach patients with end-stage renal failure. I think we can safely say that the timeframe for wide distribution of these therapies will be decades, rather than a few years, but science can surprise you.

Español
RSVP For Our Next Education Webinar: From Survive to Thrive: Tips for living well with a chronic illness
Go to Top